also referred to as 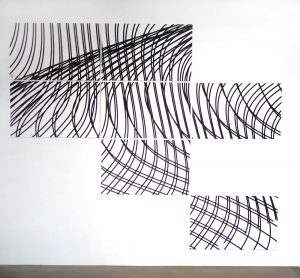 To visualize a refined approach to perception, THE PORTAL (Code du Cœur, Chromosome X Collision Part Of The Whole CXCPOTW, Teil vom Ganzen – Geil vom Tanzen) is one of two parts of an artist research project that rethinks individual and collective perception in a heuristic cognitive concept. The hypothesis of this concept is symbolically translated into a large-format painting that represents the transfer of knowledge in the information age on the basis of waves. The size of the painting makes it difficult to see the whole picture at once.

In contrast to the ephemeral character of electronically generated images, here the transfer of information is manifested as a fundamental process of organic interactions in oil on canvas.

The grid of THE PORTAL painting

The grid is evolved from a sinus wave and the composition displays a frozen resonance from an arising x-chromosom. Each single painting has the size of 80 x 130 cm (golden ratio) and is organised in a grid from A1 to P16.

By definition perception is the ability to see, hear or to become aware of something through the senses (a). It is the ability to embrace ones environment, ambience and reality (b). It is not only for artists the most important tool to become sensible of the interactions between reality and consciousness, but for every member of a community. Perception includes next to reception an individual world view, a mental inner-construction of the environment living in, and the kind of information one receives (c). Perception is not a static construction. It changes with the development and growth of ones sensitivity, knowledge and ability, also by the way to see the world through different lenses. The art world as well as the world of sciences is questioning their common perception in relation to their specialised approach to the world. Pure art and pure sciences tend to stay in their »boxes« with good reasons. Any kind of evolution would never developed so fast without specialisation.

Aristotle annotated once, that the whole equals more than the sum of its parts. So an other challenge is to add together the copious humane knowledge erupted in the first decades of the 21st century. One of this challenges is the integration of the knowledge of quantum physics in every day life. Not only in technical issues but also in questions of the interactions between matter and mind. Since nearly hundred years quantum effects are observable and the influence of human consciousness in quantum experiments is known. Its impacts are observable and points out, that perception is not only working in one direction (from outside the body into the inside). Conscious perception is a trigger for an active participation in society. Living in a global and a local environment at one go, it depends on ones sensory capabilities how much of all can and will be reviewed. Mass media and social media channels developed a phenomenally broad and deep information stream. This stream of information increases the knowledge of the society in a way never before. In 2013 big data generated quantitatively as much information as the whole human kind before (about 4 400 000 000 terabyte). Since 2013 daily 2.5 terabyte data are afresh added in the world wide web. This amount of information cause disturbance in the common global system construction. It confronts everyone with a super-sized perception stream beyond the individual perception. The basic level of individual perception refers mainly on seeing, hearing and reading. The human brain uses nearly a third of its conscious activity to process visual information. And the tendency of the conscious brain activity is to queue the rest of sensory body information behind images and text. That reduces not only the personal but also a collective world view.
A very exciting part of perception is the interpretation of the perceptional information as part of a consecutive process of reality creation. The mental construction which constitutes all interpretations to one world view, is not only decisive by the ambience, but also by the information stream from the DNA, epigenetic data’s and from the body retaining information system itself. The majority of this perception streams are handled in the subconsciousness and frees the consciousness to interact with the ambience.